One hundred years on since the outbreak of the world’s deadliest influenza outbreak. Some centenaries are perhaps best to forget about.

That is unless you are a researcher looking to understand the development of vaccines in the battle against a virus.

Scientists at the National Institute of Allergy and Infectious Diseases (NIAID), part of the National Institutes of Health, have a solution. They have cleverly developed a 3D model based on the 1918 influenza virus using a technique called cryo-electron microscopy. This model uses non-infectious virus-like particles (VLPs) and “quick-freezes samples with glass-like clarity.”

Comparing the number and location of molecules on the VLP surface with the molecular organization of the natural influenza virus revealed to the researchers physical differences that may advance the efficacy of VLP vaccine development not only for influenza but other viruses such as HIV, Ebola, and SARS.

“The more that is understood about the molecular organization of influenza VLPs, the better scientists will be able to develop effective seasonal and universal influenza vaccines,” according to a statement from the National Institutes of Health. 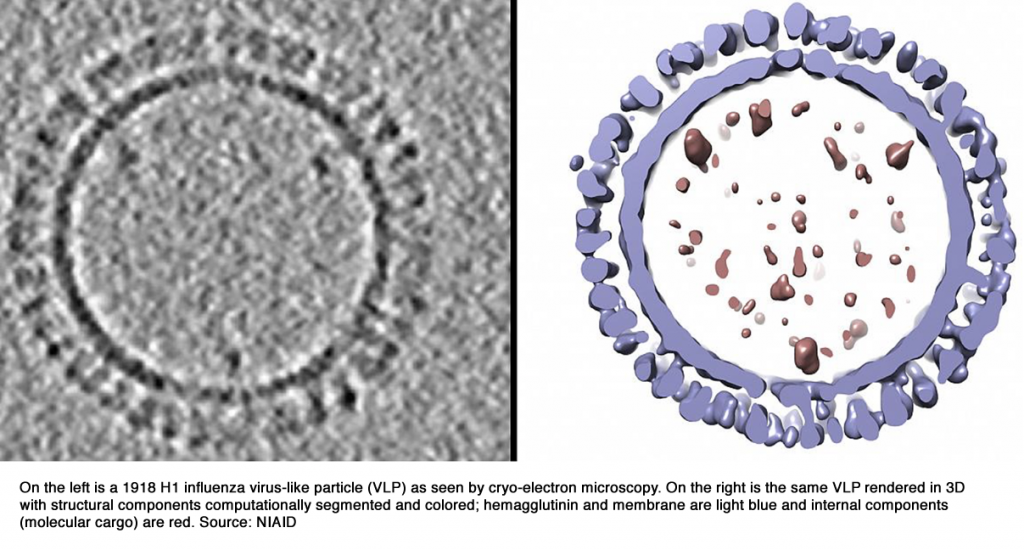 Study Finding About The Influenza Virus

The study’s findings come as the NIAID continues its research. They are still looking into the development of a safe and effective universal vaccine against influenza.

“The 2017-2018 influenza season in the United States was among the worst of the last decade and serves as a reminder of the urgent need for a more effective and broadly protective influenza vaccine,” NIAID director Anthony S. Fauci said at the launch of a Phase 2 clinical trial into a universal vaccine in May.

Annually, seasonal influenza results in 140,000 to 710,000 hospitalizations in the United States. This information is according to the Centers for Disease Control and Prevention.

The 1918 influenza virus affected all corners of the globe and killed between 3% and 5% of the world population.

It disproportionately affected younger adults, who are normally more resilient against the symptoms of influenza. Generally, we would see more cases in children and the elderly.