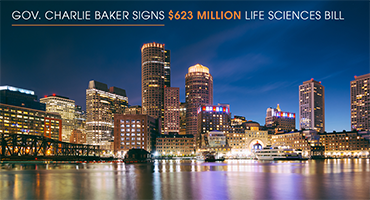 ‘An Act providing continued investment in the life sciences industry in the Commonwealth’ authorizes the state to borrow and spend up to $473 million over five years and provide tax credits of up to $150 million.

The money will be allocated in the key areas of education, research and development, and workforce training.

“This legislation will serve to reinforce our commitment to leadership in the life sciences sector”, the Baker-Polito Administration said in a statement.

The bill was signed into law at Bunker Hill Community College (BHCC), which has received grants to help establish a new biotechnology program, internship placements at 30 life sciences companies and training for low-income adults to pursue biomedical careers.

The Mass Life Sciences Initiative needed reauthorization this year in order to continue.

In addition, Governor Charlie Baker said the move would “facilitate stronger public-private partnerships and strategic investments”. His goal is to train workforces and attract world-class companies to the Commonwealth.

“In partnership with the Legislature, our administration remains dedicated to generating economic growth and supplying researchers with the tools they need to create new advancements in medical care.”

Rep. Joseph Wagner, D-Chicopee, is the House Chairman of the Joint Committee on Economic Development and Emerging Technologies. He added that the bill “demonstrated the Legislature’s commitment to economic development and workforce training”.

“We’ll be providing the tools and resources to allow for the continued investment in our people, our infrastructure, and our Massachusetts-based companies.”

“Massachusetts is home to a world-class talent pool and this legislation will ensure more educational and career opportunities for residents throughout every region of the Commonwealth,” said Lieutenant Governor Karyn Polito. “Our administration has made strategic workforce investments to educate, train and employ those interested in a career in the life sciences, empowering the Commonwealth to continue to lead the way in this field.”

In conclusion, the funding is subject to management by the Massachusetts Life Sciences Center (MLSC), with the Administration and Finance Secretary Michael Heffernan and Housing and Economic Development Secretary Jay Ash as co-chairs.